FU go Cyprus - read all about it!

Co-captain and ace goalkeeper Piipponene reporting on the first match of the season 21-22:
Finland United begin title chase with a comprehensive 3-0 victory against Cyprus in Myllymäki’s final match

Finland United took an emphatic 3-0 victory in their season’s first match against Cyprus at Barka football pitch. Longstanding captain and midfield-maestro Ilkka Myllymäki got the send-off he deserved with two goals and an excellent all-round display. Finland United entered the match fresh from their high altitude training camp that took place in the Ardennes over the weekend before (report to follow). Coming well prepared seemed to bare fruit as FU played their usual 4-3-3 formation with both left and right defenders, Maltsin and Lith, playing actively to assist midfield and attack. FU dominated the first half in possession, with the midfield pairing of Huber and Myllymäki proving particularly efficient, helped by both Caferri and Vara. Our attacking trio of Schäffer, Lepistö and Särkkä proved problematic for the Cypriot defence, with Havukainen and Ville Niinistö, who played his maiden game, also playing in order to keep the tempo high. FU applied pressure on the Cypriot team building several dangerous opportunities, and the break came from the left, with a cross being played to Ilkka Myllymäki, who first hit the post and then scored on the rebound. This was exactly the farewell our absent Macron-visiting co-captain Matias Kallio had ordered! Cypriot tempers boiled over as they were unable to bare the brunt of FU’s relentless pressure on the ball. Cyprus’s central defender reacted badly to being pressured by Särkkä and Havukainen and lashed out by kicking Särkkä. 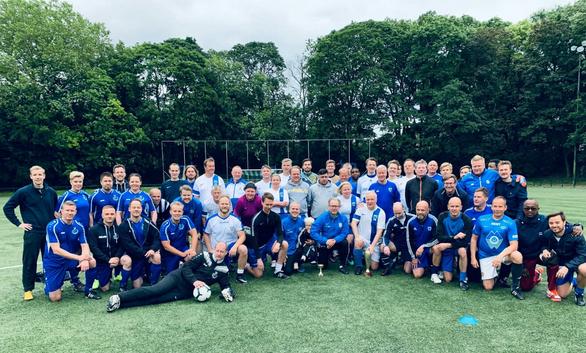 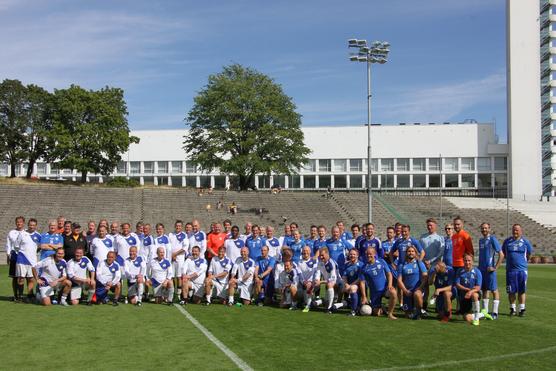 Fortunately Otto came out unscathed and the referee had no other choice but to brandish his red card for this professional foul. FU did not retaliate, in fact our composure was upheld throughout the match as only one we received only one questionable yellow.
​Cyprus managed to keep the ball in periods of the second half, but this did not lead to any actual attempts on goal. Lepistö strengthened his first place in FU’s all-time goalscoaring charts with a clinical finish in a one-on-one against the Cypriot keeper. Ile added his second of the night after a cross from Särkkä on the right left him with only the goalie to beat. FU’s classic central defence pairing of Rajnita and Lattu was yet again commanding, and goalkeeper and newly nominated co-captain Antti Piipponen was left with little work in goal.
A comprehensive 3-0 victory is a great, though not record beating start to the season. Moderate amounts of beer followed the game as Finland United also received a congratulatory phone call from co-captain Kallio from Paris, who also partook in a celebrations with a drink or few following FU’s victory. Our next game game will be on the 22nd of September against a recently promoted Poland team, with FU legend Samuel ”Samu” Laurinkari making a return to the lineup for the first time after his 2020 departure.

​Re-emerging from ashes in 2003 after a few yeas of hiatus we have established ourselves as the most successful Finnish national men's side ever (to our limited knowledge). Tournament victories, playing in an acknowledged BxlEuroleague year after year against other top nations, practicing hard every Saturday, sauna, sisu, you name it - we have it!!!
You're in Brussels or nearby? Feel like you never got that chance to beat Italy? Have Finnish roots/girlfriend/wife/spouse? Or think you can fill our tough nationality criteria (set by our expert team of Finns and others, especially Irish)? - come join us. It's fun and more fun (if you can survive Belgian weather)
Contact us through this form on sign up page
​Euroleague website

Our big anniversary match in August 2020 with our dear friends Soppa who turned 30 last year. And since Finland United was first established in 1995 it was the 25th anniversary match for us. What would be more suitable than play at Bollis, since the Olympic stadium renovations were delayed. Usual refreshments after the match were served at "Kisahallin pääty"

Spectator numbers were limited to 500 due to Covid restrictions...